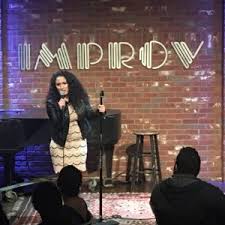 Sarah is an Iranian-American stand-up comedian in LA who frequently performs at The Comedy Store and Improv, and competes in (and has won!) Roast Battle. She has her own webseries, Saffron ‘N Rose, which she wrote, produced, and starred in. Here’s a profile of her in the press. You can check out her Instagram, @sarahfatemicomedy.

My very first job in the entertainment industry was working at  “Living Full Out Inc”, which is owned by Nancy Solari, who is a legally blind talk show host. I developed treatments for her then upcoming show, booked her as a motivational speaker at companies like Hewlett-Packard, and created Powerpoints for her online course.

I then interned at an entertainment law firm in Beverly Hills. There, I read scripts and gave notes, influencing whether or not the projects should be green-lit and which company they would best be paired with.

The best piece of advice I had was to create my own path (which technically wasn’t when I was starting out; it was while watching Emma Stone accept an award at an MTV awards ceremony when I was in high school). My professor in graduate school noticed I was an actress as well as a writer/producer and told me to create projects to put myself in. It led me to my web-series, Saffron ‘N Rose, which has garnered a lot of online attention.

“Say yes to everything even if it’s free.” I wish I’d known to dedicate my volunteer work to special events, like film festivals and student films, rather than working week after week in an office while trying to figure out how to make money on the side. Your time is valuable and you should be paid for the work you put in.

Thank you Sarah! I couldn’t agree more, especially about targeting your volunteering to the most worthwhile opportunities. You know what I always say – “If you are going to sweep someone’s floors for free, you might as well sweep Steven Spielberg’s” and “find a job on the biggest possible production, even if it is the lowliest paid.”

Usually I provide another link to my mini-course on composing your own ATS compliant resume, but in the spirit of “making my own stuff”, this time I’ll give you a link to my YouTube channel – Please subscribe!