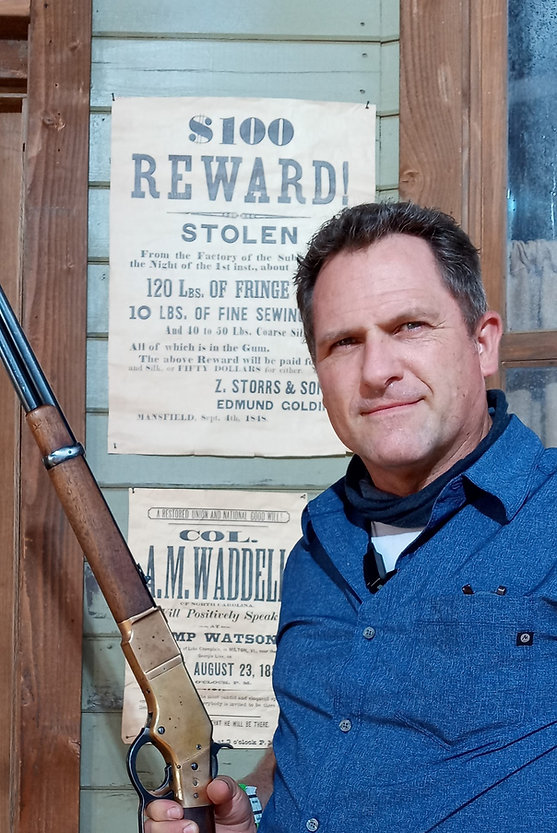 I am so delighted to present this awesome interview with Dutch Merrick, past president of IATSE Local 44, and Prop Master extraordinaire. One of his biggest recent credits is as Armorer on the series SEAL Team for CBS. Now that show had some weapons!

As an eloquent subject matter expert, he is often called upon to speak to the press on film safety issues as well as speak on behalf of the craft in the media. He’s has also written and is directing a documentary of the World of Hollywood Props.

We met many years ago, when I was working as set decorator for the Production Designer mentioned in this interview. I worked at that same Playa del Rey warehouse/sound stage. When I had the chance to hire a prop master, bringing in Dutch was a no-brainer. He became my go-to guy. He’s a team player, super creative, able to “MacGyver” anything, and the definitive professional. In short, I couldn’t afford his rate today!!

Currently Dutch is about to offer his updated Prop Gun Safety course that recent events in our industry have proven is certainly needed. Read through to the end of the interview for a terrific discount code. And you should know that he is trained and properly LICENSED to provide this invaluable training.

Here’s how Dutch writes his own bio.

In the ensuing 25 years, I served for 14 years on the Executive Board and am past President of Hollywood’s largest Craft Local, IATSE Local 44.

Today I run hands-on workshops for Property crews, Armorers and others to learn to handle prop guns for film, TV and theater. In the wake of the “Rust” tragedy, I was reached out to by Variety magazine to speak on what a Hollywood Armorer is supposed to do, properly when managing firearms on set. That led to interviews by Good Morning America, ABC, NBC, CBS, CNN news and others. After about 40 national interviews I realized that we have a void in Hollywood for proper apprenticeship programs and particularly prop gun training.

So I was inspired (pushed really) to start my company, Prop Gun Safety LLC where we are setting a new, higher standard for prop gun management industry-wide.

1/ What was your first job in entertainment, and how did you get it?

My first gig in the business 26 and a half years ago was actually as a Gun Wrangler on an ultra-low-budget feature film. I had been working as a chauffeur for a music industry limousine service, driving artists and executives to and from the airport, awards shows and divorce court. That got me onto film sets, where I was in wonder when watching the cast and crews working in an unspoken harmony. I was really attracted to what I thought of as a synchronized crew ballet of sorts. The star-factor didn’t phase me as I’d been working next to celebrities for 5 years at that point. (And they even got right in my car with me!)

I knew a Script Supervisor (whatever that was… I had no idea at the time what she did for movies.) named Kimberly Eaton. I told her I wanted “in” to the business. Her first question was, “What do you do? What is your craft?”

Well, I thought, I had seen a crew guy handling a gun for a scene once. And heck, that’s my thing. I have been a competitive pistol shooter since high school. I figured I could work in that position handling guns for shows. She said that if she ever heard of anything, she’d call and let me know.

Close to a year may have passed and I got a call from her saying, “Hey! I’m on a little non-union action film and the prop master is totally not a gun guy. Can you come interview right away?”

I showed up to an unassuming warehouse in Playa Del Rey within the hour, dressed in my “limo driver suit” – I was between airport runs in the limo at the time. As I went into the building somebody asked me is that your limo? “Why yes, it is.” ( I just didn’t tell them which door I came out of!)

I interviewed with the Production Manager and he thought I’d figure it out on the job and so he hired me. When I walked out, there was Kim, “Did ya get the job!?” Yes, I did and they’re gonna pay me $125 a day. She marched me right back in there and told the PM that I wasn’t to make a dollar less than everybody else at $150 a day!

So on my first day in the business, I got a big raise and had already been undercut by my first Producer(!) My start day was January 6th, 1996, at 6am. I’ll never forget the shaking hands in the morning and the dragging feet 12 hours into the first shoot day.

2/ What about your second?

When my first picture wrapped, the Production Designer, Jesse Johnson came to me and asked me to prop master his next low, low budget indie film. I said, “I haven’t a clue how to prop master, I just started as a gun guy!”

He told me that I’d been working circles around the prop master and would sure figure it out as I went. I took the gig and bing, bang, boom, I had 2 film credits to my name and was pulling in “a cool $150 a day.”

That little film led to the next and the next and so on. Each subsequent feature went up in budget, duration, pay and expectations. (No longer would I be propping the show from items in my own house!)

3/ What is the best piece of career advice you were given?

The best advice I was given was probably that I have 2 ears and one mouth. So I should use them in proportion. Of course, that advice came about 15 years in, so I probably jabbered on enough to stunt my advancement those early years.

The other advice, if I may, was to never say “no.” As a prop person, my job was to say yes and to find a solution. No matter what. Even if the ask was clearly impossible, I would have to figure it out. Or come up with a substitute solution. That may mean asking for a slight re-write in the worst cases. Or to “cheat” an article on camera that wasn’t exactly what was scripted. But as long as I found an effective way to help tell the story, I was welcomed back on set.

The worst advice I ever got was from someone who always “worked down to the rate.” His motto was that if they aren’t gonna pay me my full rate, I’m not gonna give them my full effort. That guy still circles the low-budget, non-union world, 20 years later.
I wonder why?

Always bring your “A” game. Always.

It might be a matter of doing a great job in front of someone who later takes you with them to “the Big Show.” And it may just be a matter of personal pride and satisfaction that you gave it your all. And besides this is a collaborative, creative process. If you pull your punches, the whole product suffers. Who wants to be part of something half-way awesome?

5/ What advice would you give to someone starting out who wanted to do the kind of work you do?

The quickest way seems to be to disappear someone and assume their identity. That’s just what I hear though.

No, but seriously, there are as many different ways to get into the crafts as there are people. Generally, it is a matter of working as a Production assistant, often in Commercials. That gets you exposure to the set, to the crafts, to the processes and the mindset. (And the hours! The long, long hours.) Pass muster as a “PA” and you have a chance to graduate into the working crafts and eventually joining a craft union.

Make yourself available for any production work. Anything at all at first. Get the experience, do the time and meet people. Then more importantly, follow up with people. Make friends along the way and stay in touch at least semi-regularly.

When we were starting out, there was no such thing as “social media.” So it was phone calls and later, emails to stay in touch. Nowadays it’s worlds easier to stay in touch with a post on social here and there and a direct message or two now and again. But the flip side of that is that everybody is getting bombarded with input from 100 different people all week long there. So, reach out, make it personal. [Ed: Well, now. Isn’t that how we just reconnected?]

And be genuine! Fake people only get so far in Hollywood. Be real with people and don’t put on a facade of flattery or cockiness or super-humility. Just be you, without playing to what you think people want to hear. Seriously. Be yourself, from the very start.

And have fun at your job, whenever you can. Don’t be a class clown, but keep it light and focus on completing the tasks required to get to picture wrap.

By the way, My script supervisor friend, Kim, later went on to run the commercial department for a pretty good sized company and hired me many times to do voice overs for commercials she was producing. We are friends to this day. And Jesse? He went on from Production Designing and now directs action films full time. We keep in touch and reminisce about how far we’ve come since back in the days in the warehouse in Playa Del Rey all the time.

Readers of this article are welcome to a $20 discount on Dutch’s 8 hour workshop, with the discount code “Robyn.” Valid through the end of 2022.

If you enjoyed this article, please share this interview on your own socials!