Once I left acting, I started my professional theater career in the Wardrobe department. This is the group of people who realize, manage, repair and maintain the costumes that the Costume Designer has designed. There is a department head, usually called the Wardrobe Supervisor (old fashioned terms – Mistress or Master), who keeps track of the entire wardrobe, and manages the schedules and hiring of others to fulfil the needs of each show.

Often the Wardrobe Supervisor is attached to a theater company and has the additional responsibility of managing and maintaining the company’s wardrobe storage. This will often be a large collection of period and contemporary clothing and accessories from which the Costume Designer can pull, and the Wardrobe Supervisor will then alter to fit. Generally, this person is good at sewing, pattern making, and fittings, as well as having a strong understanding of stain removal and fabric care. Usually they will have design abilities and knowledge of the history of clothing. Additional helpful skills include millinery and costume jewelry making. In small companies the Wardrobe Supervisor will often take on the costume design of a show. Costumes may be sourced from the existing wardrobe store, rented from vendors or other theaters, purchased, or built.

Other people who might be employed in Wardrobe could be pattern makers, cutters, stitchers, dyers, embroiders, cobblers, milliners, glove makers, knitters – all in the costume building stage – and dressers. Dressers ensure that the performers are wearing the correct costume for each scene, and help actors get into and out of their clothes. They prepare, clean and maintain all costume garments. Stars usually have their own dedicated dresser. In a large production, there will be several dressers – one person looking after the male speaking roles, another looking after the ladies, and some more looking after the chorus or background parts. There is always one klutzy actor who fails to hang up their costume, forgets to hand in their skin parts for laundering, or doesn’t notice the hole in their garment, until it becomes an emergency before the next show. Dressers quickly learn to watch out for those folks and keep special tabs on them. In professional theater, actors who are egregiously thoughtless resulting in damage to their costumes, can be fined, as can actors who take it upon themselves to make changes to their costumes without permission.

Dressers also handle quick changes, often in the wings. Ideally dressers should wear “blacks” backstage – that is dark or black clothing. Learning how to do quick changes is a skill that improves with practice. Sometimes they involve under-dressing (layers). When I was Head Dresser on La Cage Aux Folles (one of the biggest quick change shows ever) in Sydney, one dancer had to come off and do a full change from a can-can dress to a black spandex catsuit – no under-dressing – in about 40 seconds. We practiced over and over during the rehearsal period. At first, we just made it. By the end of the run, the dancer was leaning against the wall waiting for his next entrance.

Here’s another description of Wardrobe Supervisor job and a cool article about being a Dresser on Broadway.

This is another role that is often attached to the theater company. The theater Prop Master will preside over the company’s props store and obtain or manufacture and maintain props used in each production. Prop masters need small construction skills in a multitude of materials, faux finish painting skills, knowledge of electrical wiring (for props that light up or make sounds – like old fashioned phones), knowledge of mold making for multiples, some sewing skills, and knowledge of furniture styles, historical weapons, and general stuff from history. Think of some of the famous types of props from plays – for example The Glass Menagerie – the key props are even the title of the play – and one has to break every performance! In Dial M for Murder, one of the key props is the key to the door.

The Prop Master will provide food and drink that is eaten on stage, including sometimes having to substitute one thing for another. I heard of an actor who had high cholesterol and couldn’t eat a fried egg at every performance, as was called for in the script, but that a dried apricot centered in a piece of white bread did the visual trick. There is a whole bunch of business around cucumber sandwiches in The Importance of Being Earnest.

Prop Master is a great job for anyone who likes tinkering and making things. It requires attention to detail, good time management, and patience. If you want to learn about the kinds of skills and techniques you might employ, try reading anything by the late Thurston James, a true treasure in the history of modern theater. 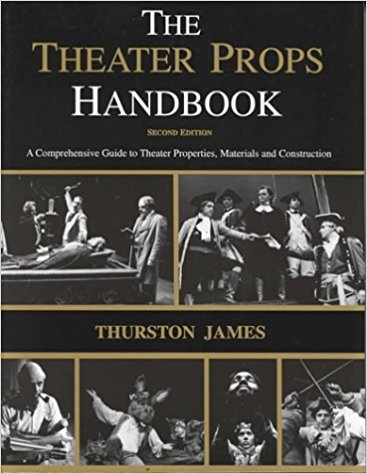 Here’s a cool site by noted film and theater prop master, Eric Hart, who also has written a couple of books, with video support materials.

Go Here to sign up for my new email list and receive a great resource list including links to networking groups, my favorite listing service, and about 100 international film festivals.