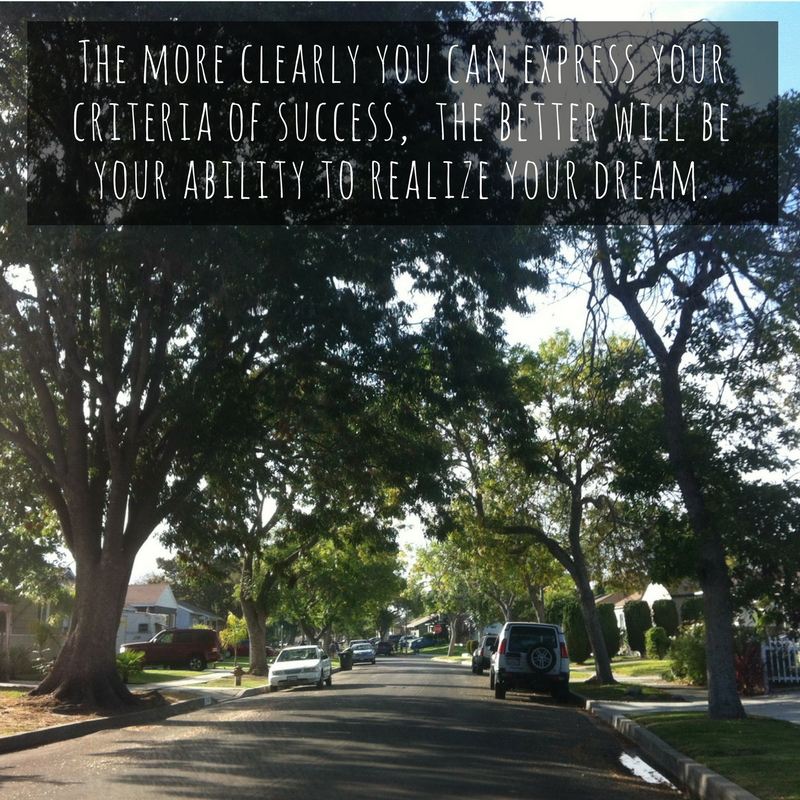 And why is determining this so important?

One of the questions I ask my clients to answer is to finish this sentence: “I will consider myself a success when…”

Much of time people write simple responses like “I am working full time in the business”, “I’m earning a living” or “I can support my family”. Obviously, these are important considerations, but they don’t help folks get to the nitty gritty of their own particular definition of success, or give people a reason to work in show business. If just earning a living was the raison d’etre, there are easier industries to find work in than filmmaking or television. Supporting a family is important too, but again, not necessarily tied to working in entertainment. People can work full time in the business with their first job, so that’s not a long-term career goal.

I added more questions to the survey – where do you hope to be in five years, ten years and twenty years? This helps people give better answers – as long as they stop and really think about it.

The truth is that entertainment is a highly competitive, high churn, exhausting, emotionally draining, and unpredictable industry. The allure of the rewards that the top people can gain – fame, fortune, legacy, travel, rubbing shoulders with the glitterati, and the satisfaction of exercising their creativity – draws far more people to the industry than will ever reach the pinnacle.

Sources differ slightly about the future prospects of employment in entertainment. According to the World Economic Forum, the jobs outlook over the next five to 10 years for entertainment in general is relatively flat. It means that for all the new jobs being created in new media, streaming services and webcasting, jobs in more traditional arenas are being lost. The biggest growth area is apparently in data analysis. On the other hand, the Bureau of Labor Statistics suggests that there will be above-average growth in some occupations, and lags in others. You can find detailed descriptions about job prospects here.

At the end of December 2017, the number of people employed in Arts and Entertainment was 2,286,900 with an unemployment rate of 6%. (Source: Bureau of Labor Statistics) They are only counting wage and salary earners, not independent contractors, but still.) This is important because the overall unemployment rate in the US is 4.1% for the same period. Finding work in entertainment is a little harder than finding it in other areas.

The magic of statistics is how they look at averages. According to BLS, the average annual income for a Director will be around $68.4K. Really? That doesn’t go very far in SoCal, take my word for it. However, you have to take into account that the big guys have big salaries. For example, Stephen Spielberg’s annual salary is estimated to be $100Million (worth every penny given the revenues from his movies). Check out some more estimates here – all dudes by the way. I’ve read in USAToday that Kathleen Kennedy makes ~ $19.4Million. That means that there are a whole lot of directors earning a lot less than $68K to make that into the average. Of course, that is just the top job, Directing. For every Director, there are a bunch of other jobs.

For anyone who wants to make a career that is lucrative and fulfilling, tenacity is the single most important characteristic to have. It’s tough and likely to be a long slog to get to a living wage, so loving it helps you persevere. A lot of the work is freelance contracting. There can be set backs and bad luck and slow times between jobs. Expect setbacks and prepare for them. Having a long-term vision helps you stay determined through those times.

Creative work by its very nature means putting your heart out there for other people’s judgement. Rejection can feel very personal. Expect criticism and prepare for it. It takes commitment to keep submitting your screenplays, writing spec stuff, auditioning, going to interviews and meetings, and making small films to display your vision and particular point-of-view.

The more clearly you can express your criteria of success, the more details you can visualize, the more you define your goals along the step-by-step timeline to your end point, the better will be your ability to realize your dream.