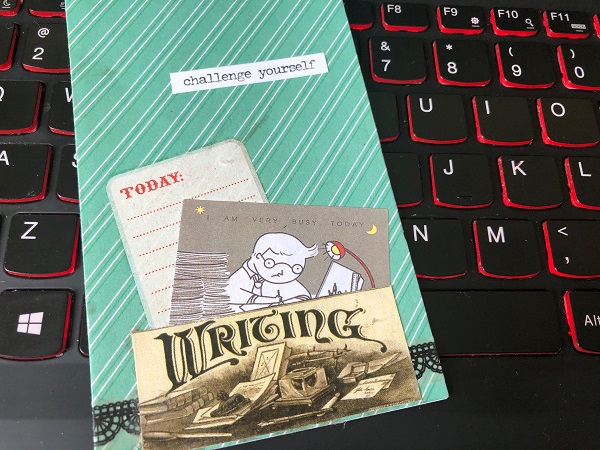 I want to share with you how I started working as a writer and what that has meant for my ability to provide at least some income for my family. I wish there was a magic formula, but there isn’t.

At the end of this post you will find some useful resources.

I was not always a writer. I considered myself more of a visual artist and a designer working in the visual field. However, I always had a very strong ability to write an academic essay. When I was in college I received good grades for my essays, including my criticism, and I also wrote a thesis as part of my honors degree.  Every now and then I would attend a class in the writing department. I got the opportunity to do a few story writing exercises, and I found writing fun and interesting, but not as compelling as I thought it “should” be if I was serious about it or had aspirations to be a fiction author.

What do I mean by that? I mean the myth that to be a writer you have to be desperate to write all the time and the myth that writers are born rather than made. I’m sure many are, but there is the pervasive idea that “I write because I must” is the mark of a true writer. This is the same kind of mindset that stands next to the idea that real artists starve in a garret and that true Artistry can only be made by hardship and persecution. I don’t believe any of those things have to be true, even when sometimes they are true.

I began writing in earnest when I started working in the film business. I found I had an affinity for the screenplay format, and really enjoyed it. I was working on low budget pictures, and it seemed to me that some of them were, let us say, rather implausible, and I thought surely, I could write an equally bad movie.

I also started doing a lot of writing after my daughter was born, and I was part of a very vigorous homeschooling community. There was a lot of online discussion and I found my earlier talents as an essayist came back to me. I wrote on my blog and in discussion groups, and I continued to submit articles to various homeschooling related publications. For a while I was a columnist for a couple of alternative lifestyle and alternative education magazines, and from there I started thinking that what I wanted to do was write books and stories, as well as screenplays.

At the same time the revolution in self-publishing and e-books happened around me, making the opportunity to show people one’s work far more accessible. For me, being published in existing mainstream outlets is still preferable, but there are many people who are making an excellent living writing and self-publishing, especially e-books. I have written and published two e-books that are part of my resume business.

The best way to make significant income just as a writer is to write genre fiction in series. This applies to people who are self-publishing and those being traditionally published. If you look at all of the major authors in the modern era, you will find that they write genre fiction in series or genre fiction within a limited genre such as romance, mystery, or historical adventure. The more you can niche your genre, especially at the start, the more success you are likely to be able to generate.

Genre fiction in series is the literary equivalent of tent-pole Summer Blockbusters and film franchises. Sometimes one feeds the other. For many people writing genre fiction series, the Holy Grail would be having your book series optioned by a Studio, and having the opportunity to either write your own screenplay, or work with another great screenwriter, to turn your book into a movie franchise. Nor do the books have to be hugely successful themselves to make great films/series, although that can help.

I was fortunate to have the opportunity through my connections to have one of my little screenplays optioned by a production company. Unfortunately, nothing has yet come of that but I live in hope and undertake rewrites as asked. It was also through my connections that I gained the opportunity to be hired to write my upcoming book, the authorized biography of my late father-in-law, the actor James Coburn. I will be able to make an official announcement about the publishing timeline very soon.

So the important lesson here is to continue networking. Networking is just as important for a writer as it is for anyone else in the business. The closest thing I have had to an agent representing my writing, has come from a referral by another writer friend of mine. Come to think of it, even those early publishing successes, writing for home education magazines came from connecting personally with those publishers through the community.

For those of you who want to start out as a writer in this industry, whether it is a screenwriter, or writing criticism, commentary or reviews, I suggest the following strategies:

Continue to write on a regular basis. Whether you set up a daily practice, which I had to do in order to write a 130,000 word biography,  or write in blocks of time, or squeeze out half-an-hour here and there around the rest of your real life, whether you are a “Pantser” or a “Plotter”, find the style of practice that works for you and follow through with it. What I mean by works for you is that you put words on the page/screen, and start to build up a body of work.

Do you need an accountability buddy? I had one with whom I checked in every single morning at the same time. Again – 130,000 words.

Join an in-real-life or virtual writers’ community. Find a few trusted people to read your work and give you feedback, that is more than just an intuitive enjoyment of your work. It’s easy to find people that will love what you’ve written because they love you. It’s also easy to find people that will tear your work to shreds for reasons of their own. What you really want is the one who can calmly and unemotionally offer suggestions or point out specific flaws with the goal of helping you make your work better.  Also consider attending one of the many writing conferences out there (after the current pandemic has passed!)

Put (some of) your work out there. I know that some people would say that’s a bad idea because of confidentiality, or balk at the idea that you are putting out your beginner work where everyone can see it and make judgments. My experience has been that it was people reading some of what I wrote, that which was on topic and relevant to my audience, (or had been critiqued and edited by publishers), that led to further work and assignments, and personal improvement in the craft. You don’t have to put out all of your work, to still have enough out there to be a visible person. Write a blog. Write articles for social media use.

Submit short pieces to reputable outlets. I link a couple of useful resources below that publicize calls from various different kinds of Publications, and most of them are paid. Enter contests – caveat emptor – when you believe they are genuine.

Continue to work on  your craft. This might mean taking some classes, reading some books about writing, or joining a group that puts out writing prompts. I have found a lot of value on YouTube where people talk about their process. There are courses at every level, and at every price point. You WILL get better with practice.

Keep reading professional journals and industry magazines to keep abreast of changes and trends in publishing. Read books of the genre that you write in. Read scripts.

Self-publishing has created a lot of tremendous success for some indie writers. The writers who are successfully self-publishing, usually by writing genre fiction in series, are also those who work hard at becoming the best writer they can be. Writers who are not any good, don’t gain tremendous on-going or sustainable success even with self-publishing. It’s important to work as if your work was good enough for a major publisher – edit, rewrite, edit again. If no agent or publisher likes your work, that might mean that you should enhance the quality of your writing craft rather than rush into self-publishing.

Self-publishing an e-book is supposedly the most cost-effective way to put out a book, and put out a book quickly. But it does not necessarily follow that you will immediately gain a big return just from putting out your book. Books still need to be marketed, and to be very honest it does cost money to market effectively. It doesn’t have to cost much, but you would be wise to set aside at least a little bit of money –  and I’m thinking in the order of a couple of hundred not thousands and thousands – to jumpstart your first marketing campaign.

But I am not a marketing expert to write anything about what you should be doing in that area. I simply notice what others have done.

As for getting your screenplay seen by someone who might be able to produce it, that is a whole other situation. Networking is vital. Fewer and fewer Studios and production companies are open to spec scripts. Most people writing for film and television make their money doing rewrites and writing-for-hire for existing projects.

The Holy Grail of television is to be hired in the writers’ room of a successful series. That is a step towards being the creator and showrunner of your own original series in the future. You want to work on writing your own projects not because you have an expectation that they will be produced, but as writing samples for similar genre pieces. If anything, in filmmaking understanding genre is even more crucial than in writing fiction.

Join a writing group that focuses on screenplays and teleplays. Join a networking group that holds events, and then attend them. Research screenplay competitions, and certainly ask your group members about them. Talk to the people you work with in the business about your story idea. Work on sets – start as a PA. Meet people; see what works from page to practice on a shoot. Attend the table read, if you can.

Another way in is through working in Development at a studio or production company. Did you know that the interns do a lot of the reading at many companies? If you can provide thoughtful coverage, not only will you keep your job, but you will have the chance to learn what works from the producer’s point-of-view – and they are the ones doing the funding.

Workshop your screenplay with actors. Look into small, indie theater companies in your town who might be glad to host a reading.

And like so many of the areas of the Arts, and especially entertainment, the biggest most important quality that you can bring to your work is tenacity and persistence, along with a thick skin for when they start ripping up your baby.

(I’m not affiliated with any of these. I just like them and use them.)