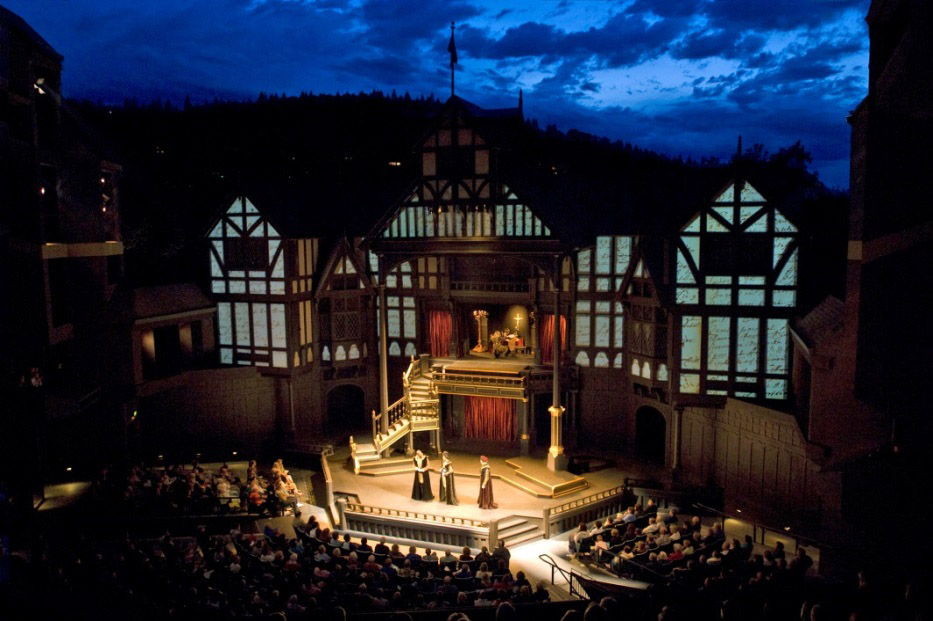 Every theater production needs a Stage Manager. This person is the right hand of the Director. They do all the scheduling, record all the progress, and hire/supervise – lead – all the backstage crew.

The duties of the Stage Manager start before auditions even begin. They will sit in on design meetings (with set, costume, lighting and sound designers). They liaise between the Technical Director and the designers as the preparation continues. A stage manager will ensure that there are audition pages (if needed), book the space for auditions, organize the schedule and ensure that everything needed for the audition is ready (eg music playback). Usually the Stage Manager will “run” the auditions, along with the choreographer if it is a musical.

During rehearsals the Stage Manager books and prepares the space, including marking out the set on the floor with tape. If you are lucky, you may only need to do this once, but if you share the space, this might be a repeated task. In small shows, the SM might also be the Propmaster. At the very least, the SM ensures that rehearsal props and appropriate furniture pieces are available.

But, the biggest task the SM does is create The Book. Since I am living and writing in US, with a history from Australia, most of my experience in this comes from an English speaking or European perspective. I make no claims about knowledge of theater practices in Japan or China, for example, or places where the written language is formatted from right to left. But with that disclaimer, I can tell you that a Book on Broadway looks like a Book on the West End, looks like a Book in Sydney, Australia, with a few minor changes in vocabulary. This is a ring binder with the script and cues, and it is standardized throughout professional theater in much of the world. The idea is that if you are hit by a bus on your way to the show, another person can take over and run the show without you. Of course, by the time you are working on a big Broadway show, the Stage Manager is watching the performance from FOH, while the Deputy Stage Manager calls the show. But for smaller productions, the SM is usually standing to Stage Left (Prompt) calling the show.

I have seen a lot of wrongly formatted books in the amateur theater world, but it is easy to learn the right way to do it. It all comes down to one thing – reverse the pages of your script so that the writing is on the left side, and the blank page (which is soon filled with columns) is on the right. This is because in English, and most other European languages, we read left to right. Below is a simplified image of what a book looks like. 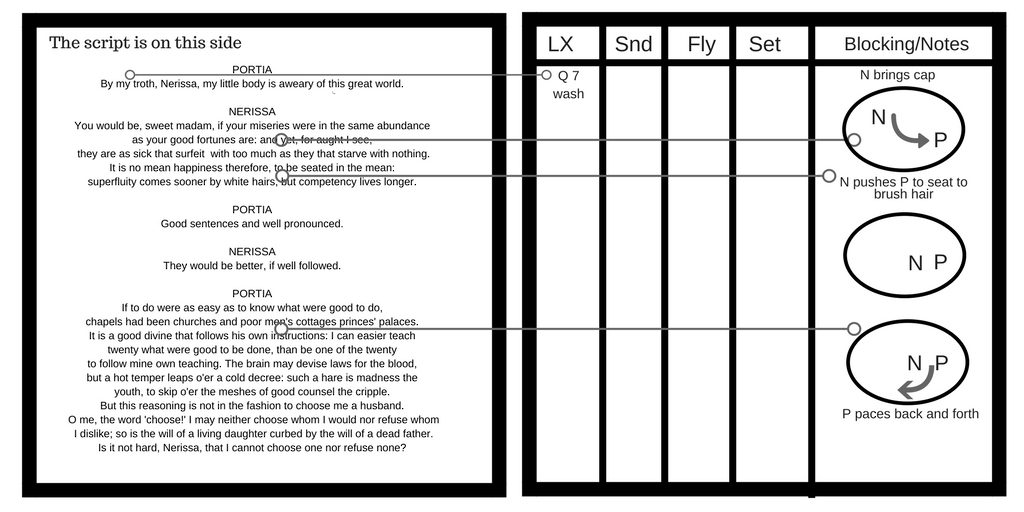 Simplified example of The Book

The set designer should provide you with one or more floor plan templates close to scale, to let you make notes of the blocking (where the actors move and when). If not, make one from cardboard. You will work with the lighting and sound designers to insert the cues in to the book, and with practice you will know exactly when to call each one. The numbering is simple. Usually you would number the lighting cues and set movement (eg flys). Sometimes people use letters for the sound cues. Often, many things all happen at once so they get a common number. You fill up the book during rehearsal, tweak it during technical rehearsals, and then use it every performance, making any changes that occur as the show develops. Do I need to say, use a pencil for all your markups? The other tool you need is a ruler and an eraser.

Sometimes the SM has to quell disagreements between different parties, or even bring the Director back on track. My experience is that Directors will want to work with the actors on characterization or other acting stuff at every opportunity – including during the tech rehearsals. It is a capital error to try to combine the several technical rehearsals with rehearsals for actors. It causes frustration and makes the whole process of setting levels and finessing cues so much longer, so you can end up with an exhausted cast and crew. The SM needs to be aware of the technical and design needs and schedule tech week accordingly, and be firm.

This shows that one of the key characteristics of a Stage Manager is very strong communication skills. They have to have the tact of a career diplomat, and also the firmness of school principal. They need to be able to read people and assess a situation quickly, to ensure that the meshing of a whole bunch of passionate creatives goes smoothly. They should have a good spatial sense, to know quickly whether this rehearsal space will work. Plus, they need to have a highly organized mind, and attention to detail with a good memory.

There are many excellent Fine Arts in Theater degrees that include Production and Stage Management, where you will learn the details of the job. To work as a Stage Manager, start working as backstage crew and offer to assist the Stage Manager specifically. Community theaters are always looking for people to Stage Manage and crew productions. Remember, holes on the right-hand side.