Here are four trends in the world of human resources, that might apply increasingly to showbiz job seeking.

The old advice to keep your document to one page has definitely gone by the wayside. Hirers generally expect to see two page résumés from most job seekers except the most inexperienced school or college leavers.

There are two main reasons for this. One is the increasingly prevalent use of email to submit résumés and the tendency for employers to read them on screens rather than print them. No longer does anyone have to print multiple copies of their documents to mail out. No longer will the old fax machine be tied up spitting out pages of applications.

However, just because you can send more info by email, doesn’t mean that you necessarily should – people are only going to read for so long. The internet has trained all of us to make snap decisions about whether to stay or click away. According to one eye movement study, recruiters spend 6 seconds looking at a résumé on paper, let alone on a screen. Keep your résumé succinct and, above all, clear and easy to read, including on a mobile device (and always email a PDF to preserve the formatting.)

The other reason is the general change in how people’s lifetime careers will look. No longer will most people start in a business as a school leaver and stay with the company until retirement. More and more industries show fluidity and movement between not only corporations, but also types of employment – part vs full time, temp assignments and freelance workers, telecommuting and entrepreneurship. It’s almost like the rest of the world has caught up with how most people work and live in the film industry. You simply need a longer résumé to do all these different jobs justice.

2.Pictures on Résumés and Video Résumés

These are a couple of trends that are causing debate among HR professionals. Unlike actors whose visual presence is a big part the job, a person’s appearance shouldn’t matter for production or backstage work. Critics of using pictures or videos of yourself on or as your résumé presentation argue that the images allow unconscious bias or even overt discrimination in hiring. Proponents remark that photos will make your document stand out, and that people will find out what you look like anyway. (see Number 3 below)

My feeling is that even if photos are popular in Europe, we in the USA aren’t there yet. We already have problems with discrimination just over people’s names. Some recruiters here are so wary of even the suspicion of bias, that they will discard résumés with photos rather than risk a single dubious impression.

If you do use a photo, it should be a professional head shot, and that is an expense a recent graduate might not be able to afford – keep your receipts and claim it on your taxes as a job seeking expense. Use the same one on your website and social media profiles.

As for video résumés, they are less a trend than a fad. I suspect that they are being promoted primarily by people who offer a service in producing them for you. In the film business, and I would expect in theater as well, it takes longer to speak your credits than read them. Nobody has time for that. It will be enough if your written résumé, after 6 seconds, elicits enough interest that the Producer wants to click on the link to your snappily edited and beautiful reel. Oh, and don’t make your résumé a link fest. One or two links to your best work are more likely to get clicked; a plethora will tire the reader too fast.

Here’s my recent infographic about the social media and hiring. 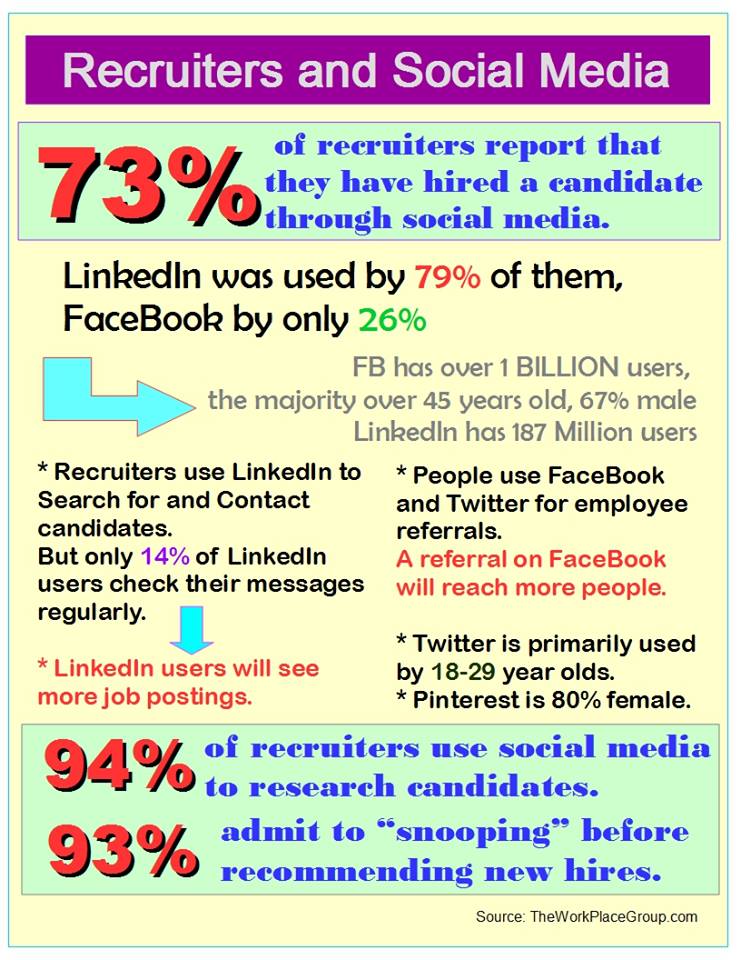 It is important to be aware that hirers will look you up and take note of what you post and what you say. Don’t be stupid, by which I mean don’t post drunk or semi-naked selfies, or pictures of your home that show you to be a slob. For goodness sake be aware of your backgrounds! Don’t vent about horrible bosses or unpleasant past jobs in public spaces. You want to gossip? Do it in a secret group. Or better yet, don’t gossip.

However, in this modern age, it raises just as many questions if you do not have an internet presence. People check the veracity of your credits and job claims on IMDb. Being left off the odd credit happens, and you can supply the information to IMDb to be added. But being invisible is a big red flag. I have had people cite privacy concerns. So have a business number and PO Box and don’t post your personal stuff. This is business. You need to have your relevant business history on line.

Nowadays even for entry level jobs, expect a longer, tiered interview process. There is likely to be a phone pre-interview, then another often via Skype or Facetime.

You are likely to have two or three interviews by phone, before being asked to come in for a final interview with the top people. For development jobs or internships, you might be asked to do some coverage as a test. The duties of entry level people and college interns in production company offices often includes script coverage, as well as idea pitching. Obviously doing coverage in-house saves a considerable amount of money compared to sending scripts out to professional reader services. This means that the process of moving many scripts forward towards green-lighting begins with the least experienced people in the business. Makes you think, doesn’t it…..

Best wishes for a prosperous and busy 2016.