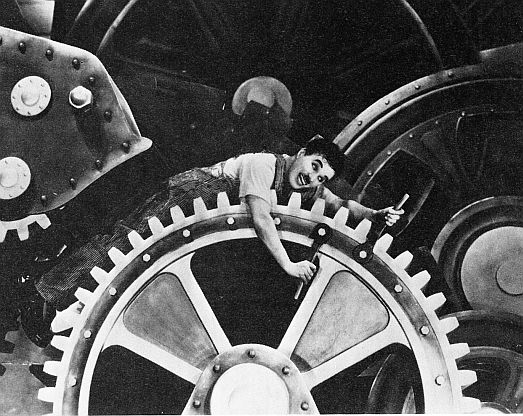 We who work in film are so lucky that our heritage, by and large, is still available to us. Unlike any theater performance prior to about 1910 (or 1927 if you want to hear dialogue) films endure. Imagine being able to see Shakespeare performing at The Rose in his own plays, or Sarah Bernhardt in her early days at Théâtre de L’Odéon in the 1860’s. Although some early films have been lost to time, efforts at preservation and restoration, and the evolution to digital, mean that the work of past masters of the art form is available to us.

Moreover our contemporary access is almost unrestricted in practical terms. Compare this to any time prior to the early 20th Century. In order to see artwork one had to travel, and be invited into the homes of the wealthy, or visit grand public spaces where art served to glorify the ruling elite. Most people would never have any idea what a great masterpiece would look like unless they traveled to see it in situ, or someone else made a portable copy. Having miniatures made of loved ones was an expensive proposition. Nowadays anyone can visit a library to see images of works (although that is not quite as good as the real thing) or google it.

Our art form, film, is specifically designed and intended to be consumed by as many people as possible. Distribution structures exist to ensure that a film continues to available in our homes, eventually for free over broadcast networks. All we need is an internet connection and the price of a rental. Plus as our home screens get larger, or our experience more immersive, seeing a movie at home is almost as good as at the cinema.

I encourage everyone who wants to work creatively in the film business to make a point of studying the work of filmmakers from the golden age of American film, and from other countries than your own. Many of our greatest contemporary filmmakers express their own enthusiasm for watching movies.

I go through periods, usually when I’m editing and shooting, of seeing only old films. ~ Martin Scorsese

Film is history. With every foot of film that is lost, we lose a link to our culture, to the world around us, to each other and to ourselves. ~ Martin Scorsese

I just grew up watching a lot of movies. I’m attracted to this genre and that genre, this type of story, and that type of story. As I watch movies I make some version of it in my head that isn’t quite what I’m seeing – taking the things I like and mixing them with stuff I’ve never seen before. ~Quentin Tarantino

I think of Ray Harryhausen’s work – I knew his name before I knew any actor or director’s names. His films had an impact on me very early on, probably even more than Disney. I think that’s what made me interested in animation: His work. ~ Tim Burton

Studying classic films gives us distance which allows us to be impartial and objective. It also shows us how long ago the foundations of filmmaking – genres, conventions, story structure – began. The standard operating procedures of making a movie were established about 100 years ago, with only slight changes to accommodate technologies.

Not every picture was Gone With The Wind (1939) or Citizen Kane (1941) -to name two of the essentials for any filmmaker – but there are plenty of sweet movies with simple stories. 1939 is considered the Golden Year of the Golden Age. But what about some other year. Let’s look at 1934. We can learn a lot from merely looking at a few statistics and the description, let alone the actual movies.

According to IMDb there were 1,175 titles released that year. The most successful by box office (by a significant margin) was a Wallace Beery western actioner, Viva Villa. It was a fictionalized biopic about Pancho Villa. Read the information about the film and learn that it was the equivalent of today’s summer blockbuster action flick. It had a remarkably high budget for its time, a popular but reportedly demanding star, several key personnel changes for political reasons, and the big selling appeal of being shot on location abroad.

The second highest grossing picture was The Black Cat, a genre horror film with staples Boris Karloff and Bela Legosi. The story was adapted from Edgar Allen Poe – taking inspiration from literature is another common and on-going practice. The story actually sounds extraordinarily similar to the premise of perennial cult favorite, The Rocky Horror Picture Show (1975).

However neither of these pictures are what people think of today when you say 1934. The most popular and highly regarded films today from that year are gorgeous road comedy It Happened One Night with Clark Gable and Claudette Colbert, Katherine Hepburn’s first Oscar win follow up, the character drama (with social relevance) Spitfire, and the adorable first installment in the now beloved comedy detective series, The Thin Man. (These three films are 20th, 18th and 19th respectively on the box office tally list.)

From watching any of these three, we can learn a lot about:

These films came from the hothouse of the old Studio system. In many ways it worked like a super busy repertory company, with a stable of actors who were either versatile, or a helpfully definitive type that immediately signaled information to the audience. The assignments to projects regardless of interest, the pace of work (grueling and constant), the abuse of women, children and animals – these are negatives that have pretty much disappeared in the film industry today, thank goodness. But so has the high level of on-going employment, and what might be called the closest thing to job security that could be found in show business.

So that is my advice – very simple. Study your history. Watch films, read bios of people, understand the rich heritage and the giants on whose shoulders we all stand.