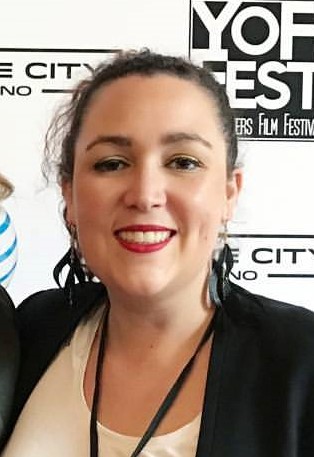 As well, Natalie is a Board Member of Eyes of the World Films, a nonprofit organization aiming to protect our global ecosystems through education, media training, and global outreach campaigns, and is a proud member of New York Women in Film & Television.

Natalie will be speaking on the topic, “Alternative Revenue Streams for Filmmakers” at the 2019 Yonkers Film Festival coming up in November.

My first full time job in the industry was working as an assistant for Stephen Apkon, the director of the documentary Disturbing the Peace. Honestly, I just responded to an ad on Indeed! I had been an assistant in higher education for years prior and was making a career change so I got in the door as an executive assistant. I worked for him for 6 months as part of the release of Disturbing the Peace and made connections that lead to my next job.

My second full time job in the industry was working for Odyssey Impact as a Impact Coordinator on their documentary impact campaigns. Over 2 years, this job morphed from working on impact campaigns to acting as an in-house distributor for their documentaries as Screenings Strategist. I sold community and faith-based screenings all over the country for the docs Milwaukee 53206 and The Rape of Recy Taylor. It’s through this position that I learned all about film distribution and landed my current job acquiring films for educational streaming platforms.

Finish sh!t. This advice came from Lloyd Kaufman of Troma after a showing of The Toxic Avenger (1984). So many people have a screenplay they’re writing or a short film they’re raising money for. Just finish something, even if it’s shitty. You can always improve. If you have something to show, it demonstrates to the people that hire you that you can bring a project to completion – and they know you’re only going to get better!

I took his advice and made a few short films when I started out. Having finished content allowed me to have them shown at film festivals and have a portfolio to share when networking with professionals in the industry. I still use them as examples of how I get sh!t done and they have instilled in me a respect for the hard work of the producers who provide me with the content I acquire. Plus, they’re great conversation starters on interviews!

I had a coworker who told me not to be myself. That I had to project an air of authority and doing “nice” things like baking cookies for the crew or being friendly and helpful would not allow me as a woman to succeed and get ahead. I tried taking her advice on my next job but not being myself did not allow me to make the connections I needed to make with my colleagues and coworkers. People can sense when you’re not being genuine and it makes if difficult for your fellow crew members to trust you. Now, I lean into what makes me “me” even if it means I’m “nice” or “eager.”

Show up and respond to phone calls and emails. So much of success is just showing up!

There is a view of the entertainment industry that it eats people and spits them back out. In every industry there are jerks but there are also lots of people who want to offer you opportunities. I see so many people in this industry miss opportunities just because they are not responsive. So, don’t be a flake! Show up, return that phone call, respond to that email. The person on the other end may have the power to give you that big break you’ve been looking for!

Thanks for this great information. I would add, always follow up on a sent resume, and always send a thank you note after an interview – even if you don’t think you got the job. It’s all about making connections – as Natalie’s story shows.

Do you want to compose your own ATS compliant resume? Sign up here for a FREE five-part mini-course.